RE ATAR Unit 1: the place of religion in Australian society 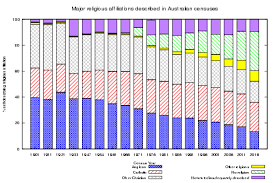 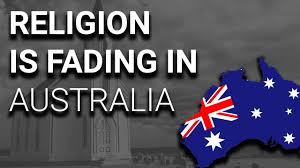 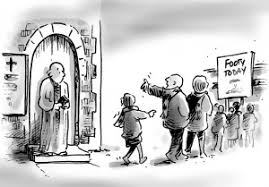 What is the profile of religion in Australia?

From Wikipedia, the free encyclopedia

Jump to navigationJump to search

No religion (30.1%)
Catholic Church (22.6%)
Anglicanism (13.3%)
Other Christian (16.3%)
Islam (2.6%)
Buddhism (2.4%)
Hinduism (1.9%)
Other religions (1.7%)
Not stated or unclear (9.1%)
Religion in Australia is diverse. Section 116 of the Constitution of Australia of 1901 prohibits the Commonwealth government from establishing a church or interfering with the freedom of religion. In an optional question on the 2016 Census, 52.2% of the Australian population declared some variety of Christianity. Historically the percentage was far higher; now, the religious landscape of Australia is changing and diversifying. In 2016, 30.1% of Australians stated "no religion" and a further 9.6% chose not to answer the question. Other faiths include Muslims (2.6%), Buddhists (2.4%), Hindus (1.9%), Sikhs(0.5%), and Jews (0.4%). As per the 2016 Census, Sikhism is the fastest growing religion in Australia which showed a 74% increase from the 2011 census followed by Hinduism(60% increase) and Irreligion(48% increase).

Australia's Aboriginal people developed the animist spirituality of the Dreaming and some of the earliest evidence on earth for religious practices among humans has been found in the archaeological record of their ancestors. Torres Strait Islander religion bore similarities to broader Melanesian spirituality. The general isolation of indigenous Australian religion ended with the arrival of the first British settlers in 1788, whereafter subsequent immigrants and their descendants have been predominantly Christian.

While the Church of England originally held a position of privilege in early colonial Australia, a legal framework guaranteeing religious equality evolved within a few decades. Large numbers of Irish Catholics were transported to Australia through the British criminal justice system. British Nonconformist Methodist, Presbyterians, Congregationalists and Baptists set up their own churches in the 19th century, as did Lutherans from Germany.

Smaller groups also arrived and established their churches. Jews started arriving in the early 19th century. The Australian gold rushes brought in workers from China and the Pacific islands, as well as specialised workers from British India, such as the mainly Muslim "Afghan Cameleers".

While Australia has a strong tradition of secular government, religious organisations have played a significant role in public life. The Protestant and Catholic churches played an integral role in the development of education, health and welfare services. 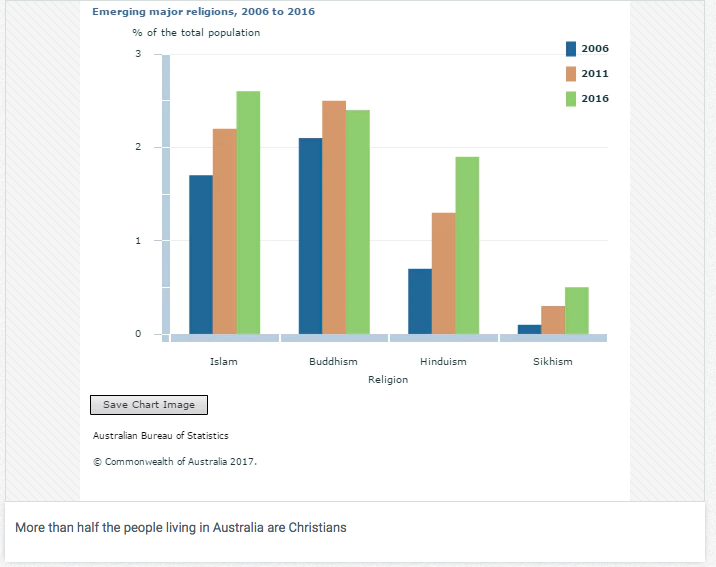 What place does religion have in Australian society?

What accounts for this?

Section 116 of the Constitution of Australia

From Wikipedia, the free encyclopedia
Jump to navigationJump to search

Section 116 of the Constitution of Australia precludes the Commonwealth of Australia (i.e., the federal parliament) from making laws for establishing any religion, imposing any religious observance, or prohibiting the free exercise of any religion. Section 116 also provides that no religious test shall be required as a qualification for any office or public trust under the Commonwealth. The product of a compromise in the pre-Federation constitutional conventions, Section 116 is based on similar provisions in the United States Constitution. However, Section 116 is more narrowly drafted than its US counterpart, and does not preclude the states of Australia from making such laws.

Section 116 has been interpreted narrowly by the High Court of Australia: while the definition of "religion" adopted by the court is broad and flexible, the scope of the protection of religions is circumscribed. The result of the court's approach has been that no court has ever ruled a law to be in contravention of Section 116, and the provision has played only a minor role in Australian constitutional history. Among the laws that the High Court has ruled not to be in contravention of Section 116 are laws that provided government funding to religious schools, that authorised the dissolution of a branch of the Jehovah's Witnesses, and that enabled the forcible removal of Indigenous Australian children from their families.

Federal Governments have twice proposed the amendment of Section 116, principally to apply its provisions to laws made by the states. On each occasion—in 1944 and 1988—the proposal failed in a referendum.

Do different religions and/or aspects of religion differ in their place in Australian society?