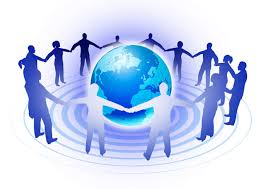 Religious traditions interact with specific cultures in complex and dynamic ways. These interactions influence how religion is perceived and understood within society, particularly around matters of concern to religion. In a multicultural and multifaith society such as Australia, there is a rich diversity of religious traditions reflects many aspects of religion and society throughout the world. (Religion and LIfe ATAR Year 12 syllabus)

Why are young Australians Rejecting Religion?

Society is defined as a moral unit made up of individuals associated together for a common purpose. The idea of society requires that there be union of effort on the part of all towards securing for each and every individual of the body a due participation in the common object; for, if each one seeks for himself alone, there is no moral union. The union of effort that is required must come from the deliberate intention of the members to co-operate for the common end, there must be a moral obligation to do so. The notion of society includes the idea of permanence. A society can be described as a permanent moral union of several persons for the purpose of attaining a common good by mutual co-operation.

Governing authority is essential to direct the members in their co-operation for the common good. For, considering the uncertain and fluctuating character of human opinion and human will, it is clear that the permanent co-operation of people is impossible without a directing and co-ordinating power to harmonise the discordant elements and direct the different forces towards a common end. 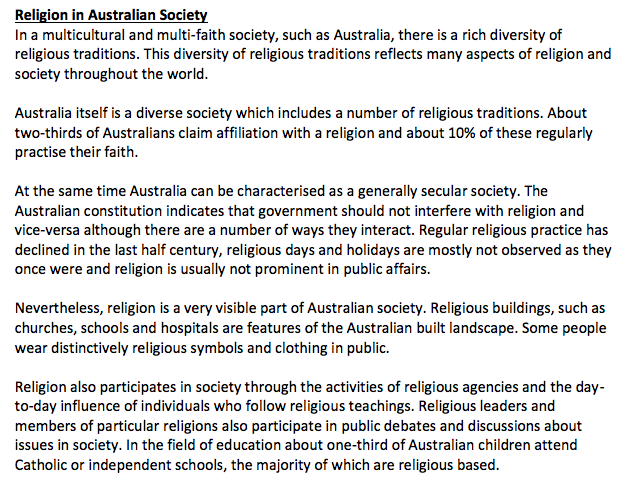 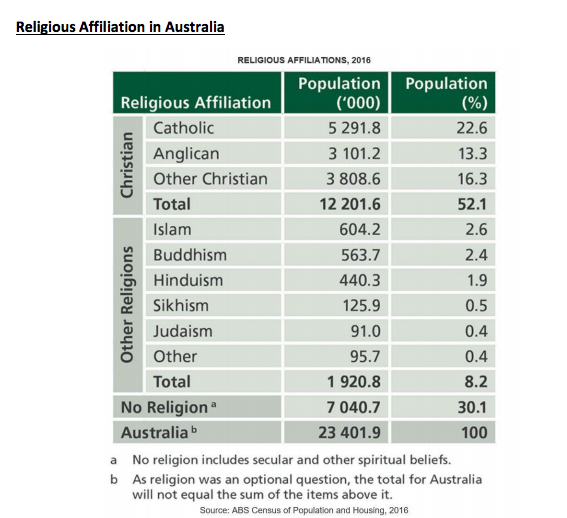 Different views about religion in society

If we are thinking about individual perspectives on religion, there are three very common and useful terms we can employ: theism, atheism and agnosticism. In everyday parlance, ‘theism’ denotes a belief in God (or, more broadly, a belief in divine or spiritual realities); ‘atheism’ denotes a conviction that there is no God (or divine or spiritual realities); and ‘agnosticism’ indicates a lack of certainty or knowledge (gnosis) one way or the other. When investigating a social or natural phenomenon, categorisation is a useful exercise. Each of these views about religion could be said to be most closely associated with one of the aforementioned outlooks (atheism, theism and agnosticism)

Religion as a belief system assumes that ultimate reality exists and religions have a basis for their beliefs. Aspects of this category include: • religions meet the spiritual needs of people • religions answer questions of meaning and purpose in life • religious transformation brings about fundamental change in people.

Religion as a functional agency assumes that religions, whether of human origin or not, are a universal phenomenon and therefore must serve a useful purpose. Aspects of this category include: • religions are organised systems that promote the stability of society • religions are good for health and wellbeing • religious ideals fulfil the need for a stable frame of reference.

It is important to remember that when looking at these categories of religious views, they are not automatically to be assumed to be characteristic of only one of the three religious outlooks (atheism, theism, agnosticism) For example a theist and and atheist may share the view that religion is a political entity, even if they disagree on its basis in truth.

The nature and object of the different areas of society: 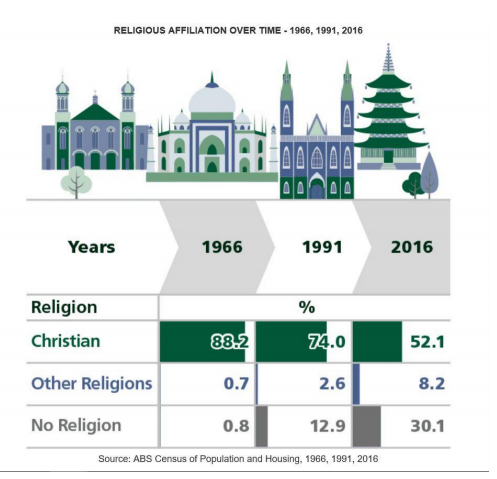 Why should the Church be involved in society?

The principles connected with dignity and inalienable rights of the human person are confirmed in the strongest way by the mystery of the Redemption and the human elevation to the supernatural state. When a social system is organised on true principles, its proper working has always to meet obstacles rooted in human passions, ignorance and sin. These obstacles can be effectually overcome only by the forces of religion. Therefore, society needs the guidance of the Church to organise a social system in accordance with natural law principles based on right reason and harmony.

Social justice is the Church’s concern when evils which have resulted from the disregard of civic duties, abandonment of social rights and duties, poverty and oppression of individuals or groups, the immense wealth and excessive power accumulated in the few, the injustice caused by the monopolies, the tyranny of the bureaucracy masquerading under the cloak of popular authority, the general unrest and widespread spirit of revolt; the antagonism between the rich and poor; the spread of irreligion and demoralisation caused or promoted by secular media; and other forms of injustice. Christian principles pertaining to the true understanding of human dignity help to understand and critique the issue of modern society.

The Family and the State are a natural institutions and society that are the result of human nature. They come into existence in response to essential human tendencies and character and to provide for needs which spring from the very nature of man.

The immediate object of the Family and the State has to do with man’s temporal interests and their existence and scope as well as their fundamental structure, spring from the law of nature which was ordained by God in the very act of creating man. The essential principles that govern human activities can be ascertained by the light of reason (natural law).

The Church is also a society founded by the direct intervention of God whose object is to lead people to their supernatural destiny, which is direct union with God. Its foundation and constitution depend upon God’s revelation to man. Its constitution cannot be altered or interfered with by any human authority.

The existence and scope of their essential principles of their structure, the fundamental rights and duties of the members are determined by God’s law but entrusted to human control (positive law).