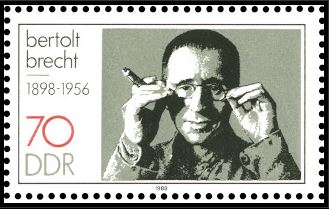 Brecht Books in the Library

Bertolt Brecht : German theatre writer, director and scenographer (1898:1956) who built on the work of Erwin Piscator to develop theatre approaches (called Lehrstücke) that produced different emotional and thematic effects on his audiences. This work, including the creation of alienation effects in a performance, later became known under the title ‘Epic Theatre’. Brecht’s theatre sought to achieve social and political transformation especially in response to forces like the rise of Nazi Germany.

Brecht Books in the Library